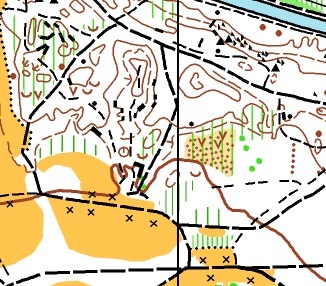 Splits Browser was not displaying information accurately so it has been removed.

I think the event was an overall success, though not without it’s hiccoughs. We were fortunate in the weather and the facilities, both the brand new Kirkstall Forge site and the 100+ year old Munitions Factory buildings that make up the scout hut. If it had been wet, as it was so recently, having hard standing for parking and a dry weather-proof building, hard by the competition area, for registration/download would have been an absolute boon. There are some apologies to make. I managed, to my great embarrassment to mislay the keys after we had opened the scout hut but before I had opened the toilet block. We were saved by the helpful staff in KIrkstall Forge office block who allowed use of their facilities but apologies for the additional walk. The keys were in our car all the time. Because I got into a flap about the keys, I forgot to put up the sign at the splitting of the way to the two starts. The registration team tried to give instructions on the routes but were overwhelmed by the numbers registering. Apologies to those who had to come back to the hut to ask for directions. Equally, apologies about the delay in the starts. Bramley’s “Scallies” are a bit well known and we have lost controls during previous events. We decided that controls would go out in the morning. Unfortunately, putting out, grippling and controlling 61 of them across the two areas, between first light and 10:30, beat the planner and controller despite their best efforts - and judging by their state when they came in they had been running pretty hard! Finally, we did manage to run out of maps on some courses. That’s encouraging for the numbers (see below) but of course frustrating for competitors. Maps are a significant expense and we don’t want to throw them away so judging how many to print is always difficult. My thanks to those who agreed to run another course and apologies to those who had to wait for a returned map. There seemed to be a good number of pluses, judging by the comments I was given or overheard. As Tim says in his notes, Chris Burden’s map linking the new area of Hawksworth Woods to Bramley Fall made for a much more interesting event, welcomed by everyone. People liked the courses and the bigger area meant the longer courses didn’t have to go everywhere twice. No-one seemed to mind the run down the road and through the station. The car parking also seemed to be welcomed, despite the walk to registration. It was certainly much easier for everyone than trying to park in the very confined area around the scout hut. Quite a few people cycled and some apparently used the train service which is great. Hopefully next time the train services will have increased to every 30 mins or better. Butler’s cafe clearly went down well and the cafe appeared to have people inside all the time. Apparently around 100 people used it during the event and the Butler’s staff were pleased too. We had another encouraging January turnout with 261 runs which represented well over 280 runners taking into account the pairs (and 3s, 4s & 5s!). Most encouragingly, that included 18 people, mostly adult novices, running the Red/Long Orange course and 15 juniors 10 or under doing the White with another 17 on Yellow. That is a great number of potential or actual new recruits to orienteering. Together they represent one in six of the competitors. Thanks are due to Tim & Richard as Planner and Controller, to Chris for the map and general support, and to all the Aire Helpers who made it possible. Thanks also to CEG (owners of Kirkstall Forge) for their enthusiasm and willingness to help, especially Emma, Rebecca and the Security Team on duty on the day, and to Butler’s Cafe who provided the excellent hot drinks in comfortable surroundings. Thanks finally to all the competitors for coming to the event. We had M/W80s down to M/W8s - and even the Planner’s W1.8 who ran the string course. Thank you for your comments and criticism (it helps us get better). You make it worthwhile. Ken Patterson

Firstly a big thank you to Chris Burden for producing the new extended map. I think linking the two areas together has created a great new map for events of this size. I know a lot of people had not previously orienteered in Hawksworth woods, so hope they found this enjoyable. As this was the first event with the new map, I deliberately planned all routes that used both areas to run down through the new Kirkstall forge complex and over the train station bridge as I think it is a fairly scenic run (one I do fairly regularly if I’m late for the train…) – however the map allows for a longer loop round the Crag Hill woods and over Pollard lane bridge – so future events can create even more new course layouts. All the feedback I had from competitors on the day was positive – I think it was the most positive feedback I’ve received for an event I’ve planned. It helped having mild and dry weather which made the courses a bit quicker than expected – certainly they were easier than back in October and November when I planned them in the rain and mud, and when the brambles were still at full height! Looking at the results and the route gadget traces that have been uploaded, everyone seems to have taken different routes, which is always my aim when planning. I’ll take it as a success that every competitor on the Brown had at least one ‘mistake’ per the WinSplits results display. Those of you who’ve run my courses before will probably know I try to add lots of route choice and decision points in to the legs, as well as adding a few long run legs along the way. The legs from the station control into Bramley woods on the Green, Blue and Brown are good examples of this – I hope you enjoyed them! It was very pleasing to see so many people run the Long Orange and the junior courses. I hope you enjoyed these and the courses were the right balance of distance, challenge and fun. Any feedback from anyone who ran is appreciated (good or bad) as its always interesting to know what people thought to try and improve for future.

Full range of courses including a Long Orange Course which is suitable for adult runners who are in the early stages of honing their navigational skills.
Final Details as at 29 Dec

On Sundays Kirkstall Forge has hourly Leeds-Shipley-Bradford trains, with connections at Leeds and Shipley. There are buses every 20mins along the A65. Public Transport maps and information are available at www.WYmetro.com

From Leeds City centre follow the A65 westwards. 1.5 km after Kirkstall Abbey turn left at the traffic lights, following the signs to Kirkstall Forge.

From the Leeds outer ring road (west) follow A65 eastwards, downhill through Horsforth to the Kirkstall Forge traffic lights.

The event will be signed at the Kirkstall Forge traffic lights on the A65.

Registration, download and toilets will be at the Hunter’s Greave scout hut, in the competition area, 450m from parking. Please only approach registration on the marked route from the station.

Hot drinks will be available in Butler’s cafe which is located on the ground floor of Number One Kirkstall Forge office building, opposite the car park. From 10.30am onwards

Controls will be enabled for Contactless punching with SIACs.

The punching Start and Finish will not be in Contactless mode and need to be punched by all competitors.

A “SIAC BATTERY CHECK” control box will be located near to registration. This is to test that the battery level of the SIAC dibber is sufficient for the event.

A “SIAC ON/Test” control box will be available in the start lane, this will ensure the SIAC is in contactless mode.

It is the competitor’s responsibility to ensure that their SIcard has registered at every control.

Traditional SI cards will be available for hire at the event from Enquiries. Unfortunately we are not able to offer SIAC cards for hire at this event. A charge of £30 will be made for lost or non-returned hire SI cards.

Both parts of the competition area are mainly open runnable woodland with some open parkland and generally moderate undergrowth. Longer courses will have a mandatory, timed out crossing over the A65.

The newly extended map will include areas under development or for other reasons marked as “out of bounds” - please strictly avoid these areas.

No dogs in the scout camp please,

Dogs under control on the courses. Please clear up any mess.

Safety and Risk: A comprehensive risk assessment will have been carried out by the organiser, but participants take part at their own risk and are responsible for their own safety during the event.

Privacy: when entering our events your name may appear in the results section of this website or in newspaper reports. Read our data protection page to see how we look after your personal data.

* Postcodes are not very precise in some areas, so don't rely on them for an exact location.