Entries are categorised, so you can search for specific types of news and information from teh archive with the links below.

Wednesday evening saw the first of the eight Winter Night Score League races held around the Streets of Farsley, Rodley and Stanningley. Andy Hobson planned an intriguing course with 30 controls available 25 worth 10 points but with 5 controls worth 30 and a bonus 30 points if you picked up all 5 of those controls. The bait was taken by a lot of the competitors with 23 out of 41 entries late back incurring time penalties - many trying to get that last 30 pointer and bonus. The event is posted on Routegadget

So if you were there why not draw your route and if you weren't at the event have a look and see how you would have picked up the bonus controls 41-45.

If you haven't used Routegadget before there is a video of how to draw your route under useful links on the home page.

Next weeks event is at Horsforth Hall Park.

Movement of the North Pole

North Pole alignment for GPS (last updated in 2015) is close to exceeding acceptable limit for navigational errors according to the journal Nature. 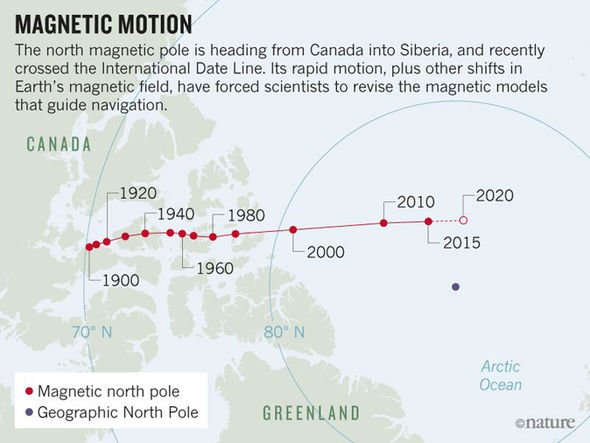 How the North Pole is shifting (Image: World Data Centre for Geomagnetism/Kyoto Univ.)

North is moving at about 50 km per year!

Great turnout on Sunday, thanks to all the helpers for making the event run smoothly on a beautiful Winter day, Results, routegadget etc. 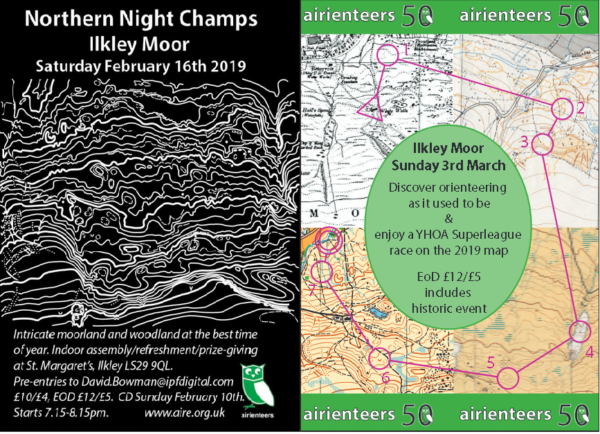 Send me your articles/photos/event reports/holiday fun for the next issue of Aire Affairs by Friday, 11th January please! Wendy Carlyle (Editor)

AIRE's urban maestro Leon Foster has won the Men's Open category in the 2018 UK Urban League which concluded in Derby on Sunday. He was able to retain his title with 4 first place and 3 second place finishes in his seven counting races.

Congratulations also to Charlotte Willis who was 3rd overall in the Womens Open.

AIRE's Fat Rascal event on 8th September in Leeds City Centre is one of the 20 events on the 2019 UKUL schedule.

Picture of some of the AIRE members who attended a recent club weekend in Coniston. After practising contours and simplification at Dale Park on Saturday we braved the torrential rain to put skills into practice at Holme Fell on Sunday. A challenging photo 'O' game c/o the Parkers kept us occupied during the evening. Thanks Dave Alcock for organising a great weekend!

Last weekend’s Southern Championships was the final event of the 2018 UK Orienteering League which covers performances on a national basis in the highest quality events across the UK throughout the year. In the Individual Leagues 4 AIRE members achieved outstanding 2nd place finishes in their age groups Ben Stevens (M21) Tony Thornley (M70) Anne Maguire (W35) and Natasha Conway (W45)

In the Club League, which was won by Bristol OK, AIRE finished 8th. The club league is based on the best 15 scores from each club our other counting performances were from;

The following awards have been made by British Orienteering:

Well done to all

Ilkley’s Tony Thornley and Peter Haines rolled back the years on Saturday. At the Southern Night Orienteering Champs near Guildford Tony won his age class by a clear 8 minutes whilst Peter came third in his class. The terrain was soft and brackeny southern common, very different from the tough hills and heather in Yorkshire.

The Southern Championships the following day were held at the beautiful Devil’s Punchbowl near Hindhead. Tony last ran here in an international 45 years ago! He improved on his twelfth place in 1973 to win his class by a minute. His course was tricky and challenging, with some steep climbs and, in places, some unforgiving undergrowth.